It was the first questioning under oath of a sitting lawmaker about events leading up to the attack on the Capitol intended to interrupt certification of the 2020 presidential election.

Congresswoman Marjorie Taylor Greene took the stand Friday in an at-times raucous court hearing that incorporated a history lesson on the Whiskey rebellion and a stirring speech from a president fighting off an extraterrestrial invasion.

Greene was in the hot seat because a group of voters say she should not be allowed to run for re-election because they say she helped plan the Jan. 6 Capitol riots. It was the first questioning under oath of a sitting lawmaker about events leading up to the attack on the Capitol intended to interrupt certification of the 2020 presidential election.

They are seeking to invoke a provision of the 14th Amendment adopted in the wake of the Civil War barring insurrectionists from running for office.

Greene vociferously denied any foreknowledge of the riot but answered many of the questions put to her about her meetings and social media posts around that time with “I don’t know” or “I do not recall.”

Attorneys representing the voters sought to characterize the Jan. 6 riot as akin to pre-Civil War uprisings including Shays’ Rebellion and the Whiskey Rebellion of the late 1800s.

“These insurrections were of a different character,” said attorney Ron Fein. “They were not quite as organized as the Civil War. The foot soldiers of those insurrections didn’t march in armies, they didn’t conquer vast swaths of territory, and they certainly didn’t wear uniforms. That is the kind of insurrection that occurred on Jan. 6.”

The attorneys invited Indiana University professor Gerard Magliocca to testify as an expert witness about how the framers of the 14th Amendment would have conceptualized the idea of insurrection, but Judge Charles Beaudrot expressed skepticism in the relevance of the testimony.

“This is what I would expect to be reading during briefs,” he said. “This is not what I expect to hear testimony on. This is historical data that can be reviewed and commented on, proffered and so forth. I’m indulging you because (of) the importance of this hearing.”

The attorneys sought to use Greene’s past interviews and social media posts as ammunition against her, including a speech in which she suggested House Speaker Nancy Pelosi could be executed for treason posted before Greene’s election.

Greene’s attorneys dismissed such statements as political hyperbole protected by the First Amendment and said they should not be considered as evidence in any case because they were made before she was sworn into office Jan. 3, 2021. The provision in the 14th Amendment Greene is being targeted with applies to people who have sworn an oath to defend the constitution before participating in an insurrection, which would mean prosecutors would have to show she participated in the insurrection between Jan. 3 and Jan. 6 of that year.

They pointed to a Jan. 5 interview in which Greene predicted a “1776 moment” the following day.

Attorney Andrew Celli sought to convince the judge that, because 1776 was the year the Declaration of Independence was signed, a pivotal step in the split from England, far-right activists use the number to refer to violent action against governments they also view as tyrannical like that of President Joe Biden.

Greene said she was referring to plans to object to the vote counts that showed Biden winning the presidency.

In one exchange, Celli appeared to question whether Greene left a coded message from the 1996 Will Smith film “Independence Day” as a call to violence in one of her videos.

“I have no idea what you mean,” Greene said.

“Well, that’s something that you borrowed from a movie script, right?” asked Celli.

“I don’t know what you’re talking about,” Greene said.

“You borrow that line from the movie Independence Day, right?” Celli asked to a smattering of laughter from the audience.

Celli played a clip from the movie in which the American president, played by Bill Pullman, delivers a speech rallying the troops to fight off an alien invasion.

Greene appeared bemused by the suggestion she had included such a coded message.

“I don’t view courtrooms and politics as Hollywood like you do,” she said. “That is not the first person, I’m sure, that said that, and won’t be the last, and I don’t recall being any inspiration from this Hollywood movie like you’re suggesting.”

“So you were not communicating in referencing that film, that Jan. 6 was going to be a new kind of Independence Day?” Celli asked.

“All I was talking about is objecting and standing up for people’s votes in our elections,” Greene said.

Greene’s attorney, James Bopp, sought to cast his client as a victim of the Jan. 6 riots, playing a video message she sent out from a phone booth inside the Capitol urging the protesters to be peaceful. Greene testified that she thought the protesters may have been members of Antifa or Black Lives Matter disguised as Trump supporters.

Bopp said Greene’s speech falls short of the legal test for inciting violence, and that he fears a trend of bureaucrats and judges interfering in elections by eliminating candidates they find personally distasteful.

“If this line is breached so that the political hyperbole of calling people insurrectionists turns into lawsuits brought by interest groups in order to abort our democracy, destroy the rights of voters to vote for candidates of their choice and precludes individual members from running for re-election, our democracy can’t survive that,” he said.

After the case concludes, Beaudrot will deliver a report to Secretary of State Brad Raffensperger, who will make a final decision, barring appeals. 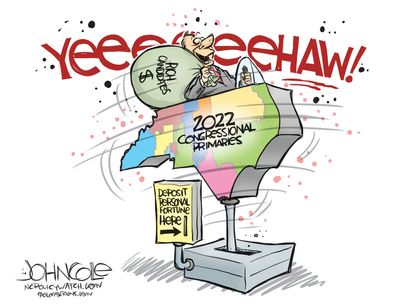 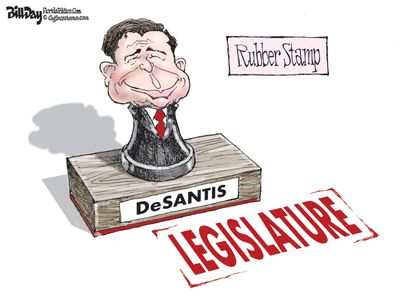