Ten years after DACA, undocumented youths in Kansas and across the nation need further change

The Kansas Reflector welcomes opinion pieces from writers who share our goal of widening the conversation about how public policies affect the day-to-day lives of people throughout our state. Diana Martinez Quintana is a policy entrepreneur at Next100, a startup think tank, and is from Kansas City.

Last week, President Joe Biden moved to codify Deferred Action for Childhood Arrivals by finalizing a rule to transform DACA into a federal regulation, a move that would help strengthen the legality of the program and benefit many undocumented youths. As a formerly undocumented person, I know just how much DACA can change lives.

My life was changed 10 years ago when I applied for DACA in August 2012.

The program, announced in June 2012, allowed undocumented youths who had arrived as children, lived in the United States continuously since 2007, and met a few other criteria to apply for a renewable two-year work permit. When DACA was first announced, it seemed like a dream, but shortly after, it became a reality. The immediate and persistent fear of being deported and separated from my family and my home in Kansas City no longer loomed over my head.

That day in 2012, I stood clutching my paperwork, evidence that Kansas City was my home, at Guadalupe Center’s free DACA clinic. Biden recently said that day was a proud moment for him. For me, it was a moment of hope. I could imagine opportunities for my future: I would finally be able to work and get my driver’s license.

As I waited in line with hundreds of other undocumented youths, I reflected on the fact that this temporary protection was not given to us. It was won through years of advocacy and organizing powered by immigrant youths — often referred to as “Dreamers” — and I was proud to count myself among one of them. It taught me a lesson that we must always remember: real change happens when ordinary people come together to demand it.

I joined the “Dreamers” movement after I graduated high school in 2010. I stood on the shoulders of undocumented youths who had been organizing since the early 2000s. When I joined the Kansas/Missouri Dream Alliance, a local affiliate of a national network led by and for undocumented youths called United We Dream, I finally felt that I was not alone. Before joining KSMODA, I never talked openly about my undocumented status, as it had been something I was made to feel ashamed of by the mainstream anti-immigrant narrative and the silence of the broader public.

I began to see that Kansas City was just as much my home as anyone else’s. The only difference for me was that I needed to fight to be able to stay.

As KSMODA members shared stories with one another, I began to see that Kansas City was just as much my home as anyone else’s. The only difference for me was that I needed to fight to be able to stay.

In the summer of 2010, as UWD was ramping up the pressure for Congress to pass the DREAM Act — a law that would have created a pathway to citizenship for undocumented youths — I had the opportunity to join a sit-in with 19 other undocumented youths in the atrium of the Hart Senate building. I jumped at the opportunity because I knew this was a cause that was bigger than myself. In choosing to get arrested and make “good trouble,” as the civil rights icon and longtime U.S. Rep. John Lewis used to say, I knew that I had a lot to lose, but that my community had much more to gain. This civil disobedience was a way to fight for our future.

As I sat in the Hart Senate building at 19 years old, I felt a whirlwind of excitement and anxiety, but as I began to chant “undocumented and unafraid” alongside my movement peers, I felt our inherent collective power. We were taking charge of our own lives, rejecting the silence and criminalization of undocumented immigrants, and demanding dignified, humane, just treatment of undocumented communities.

After months of rallies, actions, and hunger strikes to put pressure on Congress, the day we had been waiting for finally came. The House of Representatives passed the DREAM Act.

Sadly, our hope was short-lived, as days later, I watched from the Senate gallery with heartbreak as the Senate voted the bill down. With their vote, five Democratic senators — along with the entire Republican caucus — refused to support justice for thousands of undocumented youths.

However, by then I also knew I wasn’t alone. We weren’t going to give up. Like the Kansas prairie, we were resilient. We kept organizing and pushing. Finally, President Barack Obama felt the pressure to provide protection for us and signed an executive order authorizing DACA as official federal policy.

Now, 10 years later, undocumented and DACAmented youths still face uncertainty. While making DACA a federal regulation is an important step, it is not enough. Many graduating high school students now face the same lack of protections I faced, as most arrived too late to meet the eligibility requirements under DACA. Meanwhile, DACA itself continues to face a court challenge that could undo the program we fought so hard to obtain. But as I reflect on the 10-year anniversary of DACA, what I know now, that I was unsure of then, is that if undocumented communities organize, we can win.

The vast majority of the American people want a pathway to citizenship for their friends, family and neighbors. Our elected leaders have the power to fix the broken system, but we will all have to apply pressure to make sure they follow through.

Through its opinion section, the Kansas Reflector works to amplify the voices of people who are affected by public policies or excluded from public debate. Find information, including how to submit your own commentary, here. 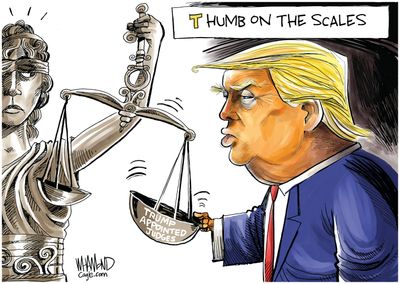 
Choose your own judge!


Trump Back For Midterms 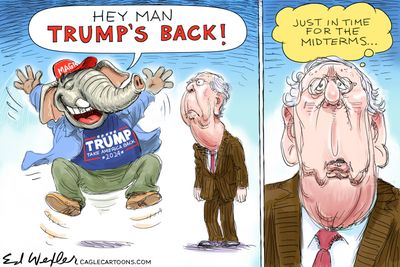