Just last month Trump was right here in Las Vegas preaching about how much he loves law enforcement.

But then law enforcement came to his house.

The FBI reportedly went to Trump’s compound or lair or whatever it is in Florida to retrieve classified documents and materials that aren’t his to keep. To which the right is saying classified schmassified, this is just a deep state witch hunt, radical leftists, argle bargle etc.

You can see their point. After all, it’s not like Trump committed an outrageous crime against humanity for which someone should obviously be locked up, like sending emails over a private server.

The details on all this are still pretty scant, but Republicans, the vast majority if not all of whom don’t know any more about what the FBI is doing and why than you do, are now pretty pumped.

They’ve seemed on their back feet lately, which is weird given the fundamentals of midterm elections when the party out of power routinely obliterates the party that controls the White House. They see the FBI’s visit to sunny Florida as a welcome development that will take some sting off Trump’s increasingly battered brand – even within much of the far right – and perhaps mitigate the palpable harm Trump brings to Republicans up and down the ballot in a general election.

Republican politicians in Nevada and the nation may be outraged on the outside. But they’re giddy on the inside.

U.S. Senate candidate Adam Laxalt is a former, if somewhat accidental, Nevada attorney general, the highest law enforcement position in the state even when Laxalt has the job. But he quickly demonstrated his support for law enforcement wilts if the subject of law enforcement’s inquiry is Trump.

Monday’s “raid” of Trump’s Florida monument to his underlying inferiority complex “is just another example of the growing weaponization of our federal agencies by the Left while people like Hunter Biden live freely,” Laxalt tweeted. “Starting Nov. 8th, this power grab will come to an end.”

First, props to Lil’ Adam for rocking it old school and busting out Hunter Biden. Super nice vintage diversion there.

Second, we’re capitalizing “Left” now? Shouldn’t the “Left” at least be an organized thing first? Because it never has been in this country.

But most impressively of course is Laxalt’s use of the term “power grab,” Laxalt being Nevada’s most high-profile early peddler of the Big Lie that culminated in an attempted coup to overturn the will of the U.S. electorate and allow Trump to illegally retain the presidency.

Laxalt has many rivals in the contest to be Nevada’s biggest, most gormless Trump suck-up, but the most notable challenger – and one who has probably garnered just as much if not more national and even international press than Laxalt (sorry, Adam) – is of course GOP secretary of state candidate Jim Marchant.

Taking a break from his busy schedule of spotting a global “cabal” around every corner, under every bed, in every closet, on every judicial bench, and in every election official’s office, Marchant called on all his reindeer friends to join him in an “emergency meeting here in Las Vegas, the source code for election fraud … to express solidarity” with Trump. Such a meeting, Marchant explained, is vital given “federal government provocations to incite political instability so as to prevent President Trump from lawfully gaining the presidency and the Republican party from winning the 2022 Congressional and state general elections.”

Reality check: If Merrick Garland’s Department of Justice was working hand-in-hand with Democrats in a partisan, politicized pursuit of a Democratic agenda, as people like Marchant would like you to believe, the DOJ would have not have sought a search warrant at this stage of the midterm campaigns.

Marchant’s reference to “political instability” is not uninteresting though, if not for the reason Marchant thinks. One of Marchant’s lesser claims to notoriety is standing shoulder to shoulder with Nevada’s fake electors when they signed their phony boney Nevada electoral vote certificate – the one  that was sent to Congress as part of the the plot to either get Mike Pence a) to throw out so-called “contested” states and overturn the election, or b) hanged.

Weirdly, Marchant’s statement failed to provide a time, date and specific location for this very important emergency meeting. Oh no! There might not actually be one. Eh, this might be one of those things where it’s the thought that counts.

Since she is the Republican nominee for Nevada attorney general, Sigal Chattah deserves a mention. For U.S. Department of Justice officials to convince a federal judge to serve a lawful search warrant in connection with an investigation is not an act of law enforcement procedure, according to the woman who wants to be Nevada’s top law enforcement official. Serving a search warrant on Trump is, rather, “how civil wars are started,” Chattah tweeted.

She sounds like a South Carolina fire-eater, circa 1859. If there is a civil war, we all know which side will fire the first shot.

Meanwhile, as of Wednesday morning, one notable GOP hopeful had evidently refrained from joining all the fun, and not rendered a public opinion on the FBI going to Trump’s house. After their candidate sat on stage while Trump called Nevada “a cesspool of crime,” gubernatorial candidate Joe Lombardo’s handlers may have decided their campaign has had more than enough Trump already, thank you, and doesn’t want to get any more on them.

He may not be a particularly influential member of Congress, but Mark Amodei is Nevada’s only Republican in it. And his statements are always pretty fun, though perhaps not in the way he intends them to be.

“Efrem Zimbalist Jr. is rolling in his grave,” Amodei’s statement begins. For you younger readers, Efrem Zimablist Jr. was an actor who half a century ago starred in a popular television program (for you younger viewers, television is … oh never mind) called The F.B.I. Advising the show, and reportedly a great fan of both it and Zimbalist, was then FBI Director J. Edgar Hoover, who among other things was a virulent racist who tried to use the power of the federal government to destroy Martin Luther King Jr. and anybody else he didn’t like. But I digress…

“If you think raiding a former President and potential presidential candidate on the pretense of retrieving archives is just another day at the office, I disagree,” Amodei continued.

As it happens, it is only Republicans like Amodei who contend the FBI served its search warrant at House o’ Trump on a “pretense.”

But Amodei’s most trenchant phrase, albeit inadvertently, is “a former President,” which indicates that no matter how singularly divisive and repellent Trump is, he should be revered for being inaugurated as president once even though he lost the election. The phrase “a former president” has been deployed by multiple Republicans, including Laxalt in a fundraising email – again, Republicans are giddy about this – as if “a former president” is a sacred figure beyond reproach, let alone federal investigation..

True, there have only been 44 former presidents in the nation’s history. And also true, Trump is the only one to have the FBI break into his safe (…that we know of; never can tell what Hoover might have got up to).

But that’s far from the only presidential distinction that belongs to Trump and Trump alone.

At the very first Jan.6 committee hearing, committee Chair Rep. Bennie Thompson reflected on a letter Abraham Lincoln had written vowing to honor the election results if he lost. Lincoln then sealed up the letter and had his cabinet sign it without seeing it. By doing that, Lincoln literally sealed a pledge to accept the verdict of the people.

Republicans are expressing outrage. Some of them are probably sincere. A lot of them are just delightedly glomming on to what they view as an opportunity to rile up the base.

Precious few if any of them are saying that if Trump didn’t have a documented history not only of lying all the time about everything, and not only of putting his own self interest above everyone else’s, including the people of the United States, but of tearing up, carting off and otherwise mishandling official documents that don’t belong to him, he probably wouldn’t be in this situation.

To reiterate, as yet we don’t know exactly what the feds are looking for. Everyone wants Garland’s DOJ to provide more information sooner rather than later. Trump himself could release the details of the search warrant he was served, but Republicans are too busy calling for Garland’s head to ask Trump to accompany his bluster with some actual information.

What we do however know is that Trump is a uniquely untrustworthy person, and a uniquely transactional one. If he carted off documents or materials that would have value to his sweetheart pen pal in North Korea, or Putin, or whoever else harbors a hurt America first policy, then what exactly is the correct response of the United States government? Trump has shown time and again that he has no morals, no conscience, and no boundaries.

Oh, and as for Trump squealing and whining in fundraising pitches and elsewhere that he’s a victim, that’s just a thing that happens on any day that ends in y. 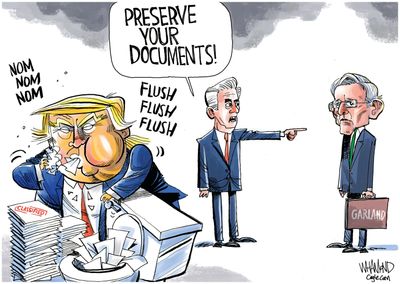 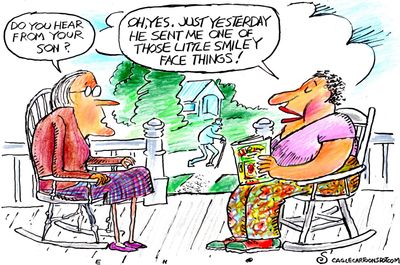