Republicans running for Oregon governor defended the Jan. 6 Capitol attack. One was there

The Republican candidates’ response to questions about the Jan. 6 Capitol siege reflects a political divide in Oregon.

A panel of Oregon Republican candidates for governor, including one currently facing federal criminal charges for assaulting police officers at the U.S. Capitol on Jan. 6, 2021, uniformly insisted recently that the events of that January day were a righteous protest.

Their remarks came to light Tuesday, when a conservative organization founded by an aide on Donald Trump’s 2016 campaign complained that video of the conversation had been removed from YouTube for violating the video platform’s policies on misinformation.

The group, Look Ahead America, has been leading rallies throughout the country against what it refers to as “political persecution” of people who participated in a violent riot aimed at preventing Congress from certifying President Joe Biden’s election. Five people died, nearly 140 police officers and countless rioters were injured and more than 700 people are facing federal criminal charges.

Christensen, a former Intel employee from Hillsboro, is among those facing charges. He is scheduled to appear via video in a Washington, D.C.,  U.S. District Court on May 10, just a week before Oregon’s primary election.

According to court documents, Christensen struck or pushed several law enforcement officers and led a group that removed bike racks blocking people from moving closer to the Capitol. Officers sprayed him with a chemical irritant to discourage him from pushing through the bike racks, but he continued to push through, according to charging documents

Christensen told Republicans in Baker City that he was trying to wave a flag on the steps of the Capitol, though photos included in court documents don’t show him with a flag. He compared himself to early Americans who participated in the Boston Tea Party.

“We wanted to wave the flag on the steps of the Capitol,” he said. “They had bicycle racks with guards behind them, so I got a little upset. You can steal an election, break state law, federal law, I have to stay off the grass and stay behind your line and not wave the flag? So I got a little rowdy.”

The audience applauded for Christensen after he told them he was facing charges.

Other candidates praised him. Merritt, a marketing consultant from Bend, said Christensen had a “great story” to tell before he falsely claimed that police invited rioters into the building.

“January 6 was not an insurrection,” he said. “If the left is calling that an insurrection, what in the world are we calling what’s happening in Portland? Because it certainly ain’t peaceful protests.”

McQuisten, the mayor of Baker City, said she talked with Christensen and several eastern Oregonians who were at the Capitol on Jan. 6. They were engaged in “peaceful prayer,” she claimed.

“None of the first-person accounts I’ve heard line up with the media,” McQuisten said.

News organizations including the New York Times have obtained thousands of videos recorded by both rioters and police to reconstruct the events of the hours-long siege on the Capitol. Videos show frantic scrambles between police and protesters outside and inside the Capitol as crowds swarmed the building.

Sizemore, an anti-tax activist who was instrumental in passing several ballot measures and now owns a painting business in Redmond, referred to the Jan. 6 insurrection as an “understatement.”

He accused Facebook founder Mark Zuckerberg of swaying election results, a theory that stems from grant money that election offices throughout the country received from a nonprofit organization supported by Zuckerberg. Local election officials used money to buy equipment, including personal protective equipment for election workers to reduce Covid infection risks, to pay staff and to adapt to changing laws, including in several states that greatly expanded mail voting because of the pandemic.

Sizemore said he was initially hesitant to believe false claims that the 2020 election was stolen, but that he’s become convinced people will do whatever it takes to win.

In an email to the Capital Chronicle, Sizemore allowed that a “few bad actors” engaged in wrongdoing, but said Democrats and journalists were trying to make the incident seem worse than it was.

McCloud, a Salem business development analyst, said the Capitol and all government buildings belong to the American people and they have the right to enter it at any time.

Thielman, the former superintendent of the Alsea School District, said the attempted insurrection was a response to the government failure.

He told the Capital Chronicle that the incident became a “mess,” and that he didn’t condone behavior like storming the Capitol or sitting in House Speaker Nancy Pelosi’s desk, both of which rioters did.

Richardson, a licensed massage therapist from White City, said she’s been part of a group “canvassing” elections in Jackson County, going door to door to talk to voters about fraud.

“January 6 was not an insurrection,” she said. “November 3 was, and we know that.”

She told the Capital Chronicle that she stood by her comments, and that she believes the media skewed perceptions of Jan. 6.

In November 2020, Jackson County Clerk Chris Walker found the phrase “VOTE DON’T WORK. NEXT TIME BULLETS” painted in 6-foot letters in the parking lot across from her office. Walker and other county clerks still receive regular threats and angry calls and emails from people about the 2020 election, and they’re preparing to combat misinformation about the 2022 election.

Christensen, Merritt and McCloud did not immediately respond to emails Tuesday afternoon.

The Republican candidates’ response to questions about the Jan. 6 Capitol siege reflects a political divide in Oregon.

Recent polling from the Oregon Values and Beliefs Center found that about three-quarters of Democrats described the events as an attempted coup or insurrection, and most other Democrats thought it was best described as a “riot out of control.” A plurality of Republicans, 38%, said it was an out-of-control riot, but 16% described it as a reasonable protest and nearly a quarter said it was carried out by Trump’s political opponents.

The Oregon Republican Party last year passed a resolution declaring the incident a “false flag” operation. Christine Drazan, then the House GOP leader and now a candidate for governor, led all 23 House Republicans in condemning the state party for that resolution.

Another candidate, Sandy Mayor Stan Pulliam, has spent months trying to walk back comments he made to Portland alt-weekly Willamette Week shortly after Jan. 6 blaming Trump for inciting violence. He now presents himself as the only candidate willing to say that the 2020 election was fraudulent. 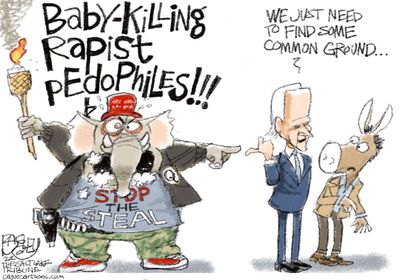